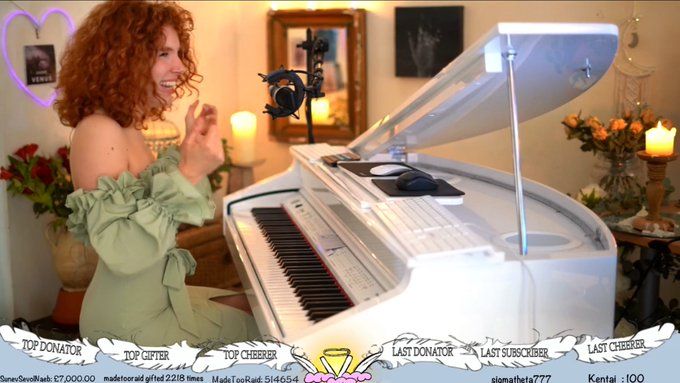 NEW GRAND PIANO HYPE - ALL ORIGINALS!! Twitch music streamer Venus, in a fetching pistachio ice cream- coloured frilly frock, wowed her global audience of Beans with an all-originals stream played on her brand new and shiny white baby grand; a surprise present from dad and co-producer Beaverbaz and bought with the birthday money gifted to him by none other than the Beans themselves. Just mahoosive thanks to you all for your incredible generosity! Thanks too for your beautiful comments such as this one from our cherished Bean dismas377:  "I'm sure it has been said before but a gentle reminder never hurts: You have set yourself apart from not just a million others, but every other voice out there. And you sure did it in a way that goes beyond what I thought possible. Many months in now but I never stop being in awe."  Our post-show raid was on the fabulous singer-guitarist Calvinthomasmusic.

Devil at Your Door

The Hour That Turned Blue

F it I Miss You